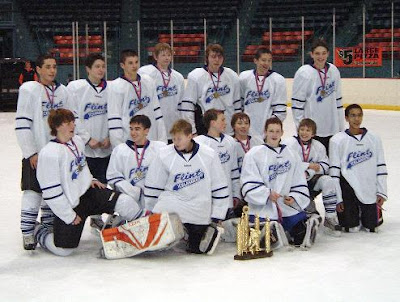 Wow! What a way to end the hockey season with an 8-1 Little Caesar Amatuer Hockey Association Championship victory over Plymouth Stingrays at the Hockeytown State Fair Grounds. It was a tight game through the first two periods, with the Stingrays actually striking first and carrying the 1-0 lead into the second. Midway through the second period, my boy JC crashed the net and cleaned up a rebound over the gooaler's shoulder to tie it up. Now our boys were off to the races. JC had a breakout monster game, with two goals and three assists! *proud dad!*

Many of these boys are Flint Powers bound, which bodes very well for the future of their hockey program. Powers lost in the semi's (Final Four) to the eventual champion, Cranbrook, Saturday by a score of 1-0 in the D3 State HS playoffs. Powers lost last year to Calumet 1-0. Another great run by a strong Powers squad again. We'll close the deal next year...

The 94 Icelanders will gather once more as a team to watch the Detroit Tigers take on the Cleveland Indians for the LCAHL Detroit Tigers Day at Comerica Park on May 3, 2009. All Little Caesar Playoff Championship Teams will be honored during the game.
Posted by DaBlade at 9:15 PM