A tenacious worm is wriggling its way across the globe and making itself a wordwide problem. It is modifying itself to make it become harder to stop. The worm takes advantage of those who haven't kept up to date, and suckers them into clicking on him. No I am not talking about the computer virus known as Conficker. I was referring to Obama's overseas trip this week. 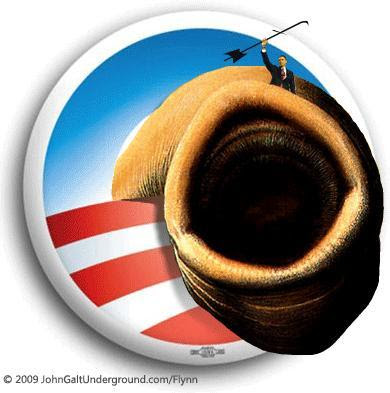 America's messiah-in-chief, Barack Hussein Obama, will arrive in Britain Tuesday for the G20 summit. He will be accompanied by his posse of 500 staff (and a team of Special Olympian bowlers), in an armour-plated limousine (with a trunk full of slightly used reset buttons and "The Incredible Mr. Limpet" DVD to add to Gordon Brown's collection).

In the far back seat of the limo known as "The Beast" (the nickname "Thunder Thighs" was already taken by the Secretary of State) will be "First Caddy", Mike 'Fluff' Cowan, originally brought on board by the administration to carry Obama's Blackberry (and since given the added responsibility of lugging around a fully-charged portable teleprompter).

Wherever MOTUS is, you can rest assured that Fluff is nearby. Of course, the limo will now be driven by Rick Wagoner, former GM CEO, now First Chaffeur.

The $300,000 presidential limousine is also equipped with a tear-gas cannon and oxygen tanks (probably with the drop down masks we've seen on airplanes) for those emergency situations when Fluff flatulates, after having child-locked the windows. "Never again" promised Obama to Michelle, and now Fluff only has to feign a giggle and Obama scrambles to initiate the drop-down masks.

Speaking of Fluff's carbon footprint, this presidential limousine doesn't sound very green to me. Unless, of course, Al Gore is strapped under the hood and providing the power by peddaling away. It would be the first time in his life he was actually usefull.

Oh, and the White House kitchen is making the trip on tax payer's dime. An Aegis destroyer, originally deployed to deal with North Korea's missile launch, will first make an unscheduled detour to England to drop off the presidential supply of wagyu beef.

Why can't Obama sacrifice by eating the local food? What ever happened to "when in Rome..."? Then again, comedian Jim Gaffigan makes a good point when stating that British food has to be bad when considering they use vinegar to improve it's taste while we use it to clean windows.

Speaking of "Rome", US security teams have already carried out three visits to prepare for Obama's first official visit to Britain (no doubt in search of a suitable venue for Obama's increasingly popular "Wednesday Toga parties").

So in conclusion...* A computer virus threatens to turn our PCs into "zombie" machines and "botnet" armies and Obama followers.
* Microsoft has modified its free Malicious Software Removal Tool to detect and get rid of Conficker.
* As for the malicious presidential removal tool, we have to wait for the Jindal/Palin 2012 upgrade.
Posted by DaBlade at 7:09 AM