Did Obama originally dismiss the NYT reporter who asked whether or not he was a socialist, or was the messiah-in-chief caught without his teleprompter again? As the story goes, Obama was thinking about the exchange as he got on the 'copter, so he decided to call the newspaper from the Oval Office to clarify. Yeah, right. Translation: His handlers realized Obama left a hanging curveball out there and wanted him to do some followup damage control.

Some of Obama's 'copter epiphany:
“It was hard for me to believe that you were entirely serious about that socialist question,” he told reporters... I did think it might be useful to point out that it wasn’t under me that we started buying a bunch of shares of banks. It wasn’t on my watch. And it wasn’t on my watch that we passed a massive new entitlement -– the prescription drug plan -- without a source of funding..."

[insert newborn baby crying noises inside your head here]
"Not on MY watch..." Wa ha ha!

Forget that his promised $Trillion dollar spendathon has nothing to do with stimulating the economy and everything to do with taking advantage of a good crisis to set his socialist programs in place. All Obama needs to do is speak articulate words and we are all "reset" and filled with HOPE.

What? You're depressed and in need of hope? 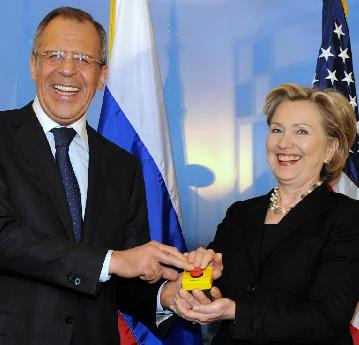 See how easy that is? Forget that the little red reset button gift (while certainly more valuable than the DVDs that Obama gifted Britain's Gordon Brown) symbolizes nuclear annihilation. Obama intended this "gift" to symbolize a RESET of relations between the U.S. and Russia. As Ronald Reagan might say, "This joke bombing begins in 5 seconds."

In the news:
The proximity of one of our Navy ships to the China coast led to a sort of macho chest bumping comfrontation. The Chinese sent ships out to shadow and harass the USNS Impeccable, an unarmed ocean surveillance vessel. The Chinese closed to within 25 feet.

"The Navy ship responded by spraying one of the vessels with its fire hoses, but the Chinese ship closed further to within 25 feet and its crew members disrobed to their underwear, the Pentagon said."

Water cannons soaking Chinese sailors in their underwear. Sounds like the mosh pit at a Village People concert. NTTAWWT and NTIWK (Not that I would know)! It would be an understatement to say that this episode will not go down in history as an epic naval battle for either of these two countries. However, since this confrontation has frayed relations under Obama's watch, AND led to hurt feelings and a large dry cleaning bill for the Chinese... 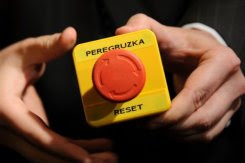 North Korea, led by that short little man with the big glasses who wears funny pajamas, claims they are preparing to launch a communications satellite. In reality, they will be test firing a ballistic missile capable of targeting the U.S. with a nuclear warhead. Pyongyang still has their bun in a knot from Bush labeling them as an axis of evil. There are hints that we may shoot down this missile shortly after launch. "The communist regime warned that even the slightest provocation could trigger war." In other words, don't even look at them cross eyed.

I do love their threat of war if we knock down their missile, thereby proving their military impotence. It's like they are saying, "Don't slap us around like a cheap $2 street walker or we will get mad!" In any case, This is happening under Obama's watch, so Pyongyang?...

That's easy! All we need to do is hand out these cheap plastic buttons that say "OVERCHARGE" in Russian, and "RESET" in English, and we can all cackle like Hillary and get along. Why didn't Bush think of this?