Obama has sucked the green right out of St. Patrick's Day 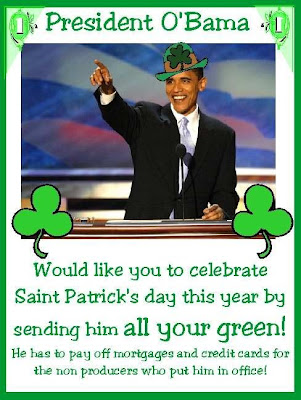 Poll question: How many green beers would one need to consume at Obama's St. Patty's Day toga party at the White House before the beer goggles kicked in, causing Nany Pelosi to look "hot"?

OK, no more "rhetardical" questions. By the way, where IS George?

At least we can all agree that White House press secretary Robert Gibbs is a sarcastic A--hole.

Question: "One quick followup: Former Vice President Cheney was on State of the Union yesterday. He had a lot -- a lot of criticism of this White House.

"To boil it down, on national security, he said the president's policies were making the country less safe. And on the economy, he was charging that the president is taking advantage of the financial crisis to vastly expand the government in all kinds of ways -- health, education, energy.

"How do you respond to those kind of allegations from the former vice president?"

Gibbs: "Well, I guess Rush Limbaugh was busy ... so they trotted out the next most popular member of the Republican cabal.

I do have to hand it to Gibbs that at least he is working without a teleprompter. His lies and obfuscations are delivered without so much as an "aaaaand" or a "thaaaaat", speech cadence so common in an Obama address because he is stalling while desperately trying to read the next sentence. It is interesting how Obama and his spokesman pounce on critics like a gang of Chicago thugs. Of course the leftwing blogoshere loves this stuff, with their headlines reading "Republican Cabal", "Gibbs Slams Cheney", "Gibbs Delivers Verbal Slap at Cheney", "Rush Was Busy", etc. and so on ad nauseum.

To be completely honest, I always found myself wishing that the Bush White House would defend themselves with these types of caustic comebacks. Put me at that podium and the gloves would come off if I had to take questions from the likes of the Helen Thomases and the rest of the handmaidens on the left. In retrospect, his dignity and professionalism is appreciated even more now that it is gone. Sure, Tony Snow could deliver a bitingly sarcastic line in front of a hostile press corps, but he did it with humor, honor and dignity. You either have it or you don't, as it doesn't translate well on the teleprompter.
Posted by DaBlade at 7:17 AM