Michelle Obama flashes her bare and toned arms for People Magazine, while flexing her foreign policy muscle. The Obamas can now claim success at something, that being the destruction of our long time friendship with England... 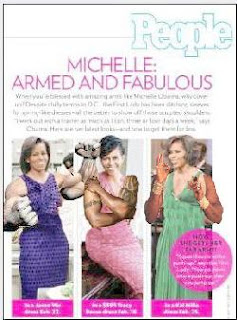 "...first the sending back of the Winston Churchill bust, then his snub to Gordon Brown... Britain's friendship is something Obama will come to regret having dispensed with so lightly. This was not the act of a global statesman, but of a hormonal teenager dismissing her bestest of best BFs for no other reason than that she felt like it and she can, so there."

While Michelle's newfound pride in her country no doubt continues to swell, my shame and embarrassment for it grows exponentially. The Obamas have now humiliated our greatest ally in this very dangerous world and those chickens are looking for a place to roost.

Meanwhile, $900 million of our hard earned tax dollars will end up in the pockets of the militant Islamic movement Hamas. We can only hope this bailout works as well as the rest of the bailouts already performed on GM and the banks. If it does, Hamas will go bankrupt in mere months.

America, you deserve the "CHANGE" you asked for. I hear the soup's ready, so let's all join the conga line!
Posted by DaBlade at 6:56 PM