I know. Nobody else cares. As you can see, this didn't stop me...

NHL -
Now this is the way differences in politics should be worked out. It would certainly weed out the likes of Al Franken, Harry Reid, Barney Frank, and The One "hisself". We'd likely still be stuck with Pelosi, since by the looks of her, she apparently can take punches about the face. Now, time for that hockey breakout committee meeting.


With Tomas Holmstrom due back in the lineup soon, tonight's game against the Columbus Blue Jackets might be Aaron's last game this season, and possibly as a Red Wing. You just know that Aaron and Columbus' enforcer, Jared Boll, will become familiar with each other. Boll is 6-foot-3, 195-pounds, and leads the league with 20 fighting majors. No invitation for tea with the Queen, these two!

"I thought Downs did a good job for us on back-to-back nights, keeps the flies off, good energy," coach Mike Babcock said.

Bantaam AA Little Caesar's Championship -
Sunday, March 15, at the Hockeytown State Fair Arena. Our own Flint Icelanders will battle the Plymouth Stingrays in this season finale that promises to be a classic! Here are the boys after a tournament win at season's start. 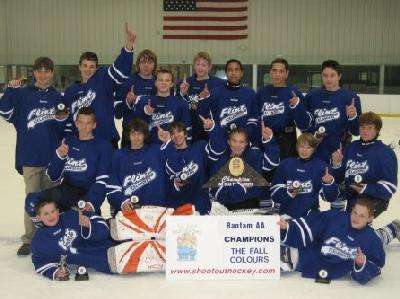