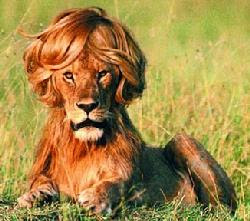 Rhetardical Question: Why would the Lions trade one of the few talented players they had last year, who also happened to be a leader in the lockerroom with a good attitude? I know Julian Peterson is a great pickup, but he would have become available anyway! Detroit football fans may never get to re-live those glory years of 8-victory seasons enjoyed during the Fontes era with moves like this. *sigh*

MORE LIONS EXCLUSIVES!
Three more lions are getting a "new lease on life". No, I'm not talking about three more football players from last year's historic 0-16 season being given a ticket out of town to join Redding. I'm talking about the three lions currently living in a rat-infested junkyard in Kansas being relocated to the Detroit Zoo.

"Big cats' owner agreed to move after a man was mauled at sanctuary strewn with cars, junk."

...the refuge was more junkyard than sanctuary, strewn with old cars, tires, cow skulls and rats. A man was mauled by a lion at the refuge in February after sticking his hand into their enclosure.

Toto, We ain't in friggin Kansas anymore. Who woulda thunk keepin lions as pets was dangerous? What could possibly go wrong? It's not like the junkman kept chimps and gave them cookies and wine in long-stemmed glasses, taking baths together and cuddling in the bed (in other words, treating them like Michael Jackson treated his overnight guests in Neverland).

In case you were lazy and didn't click, the above link is to about "Travis the Chimp", now famous for attacking and ripping off the face of it's owner. Speaking of which, maybe that's where Michael Jackson's nose went... Hmmmm.
Posted by DaBlade at 7:33 AM