The messiah-in-chief and his wife, the first lady of tanned and toned arms, have turned the White House into a frat house with all the partying and carousing this article implies. 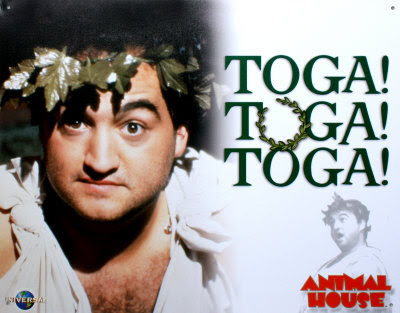 Since the presidency changed hands less than six weeks ago, a burst of entertaining has taken hold of the iconic, white-columned home of America's head of state. Much of it comes on Wednesdays.

The stately East Room, where portraits of George and Martha Washington adorn the walls, was transformed into a concert hall as President Barack Obama presented Stevie Wonder with the nation's highest award for pop music on Wednesday.

shouldn't it have said the ONCE stately East Room? The piece goes on with a seemingly endless 6-week flaunting display of a total lack of reverence for The White House shown by The One and his entourage. Everything from "foot-stomping" a cappella groups, an Earth, Wind and Fire concert, conga lines of drunks in the State Dining Room, and a Super Bowl party of chips and dip and beer farts. I'm all for having fun, but what ever happened to showing a little dignity and decorum for the historic symbol of the United States?

Besides which, what message are you sending your paltry little subjects, sir? While you are grooving to a Stevie Wonder song performed by STEVIE WONDER, the economy continues to collapse under the promised weight of your $$TRILLION DOLLAR PLUS spendathon. PUT ON A STEVIE WONDER CD NEXT TIME, IT'S CHEAPER!

The One: My plan is like a three-legged stool. Tax, spend and PAR-TAY!

That's another thing sir! Your ludicrous budget is rife with blatant and hidden tax increases on everybody, not just the wealthy.

The One: Did someone say that Ludikris is in da houz? Michelle, get the door. Ludikris is here!

Wrong. I said you are ludicrous... nevermind. The point is that you did a great job playing the class envy card to win this election by promising to tax the wealthy only and to "spread the wealth" to the Henrietta's waiting in the long soup line. Aside from the fact that your plan as stated is un-American, it is also a lie. Your little stage show recently reinforced this lie by even promising a tax cut for 95% of Americans. While Michelle is holding "girls night" parties inviting secretaries, policymakers and girlfriends over to the White House for "pop corn" and to watch the feature film "He's Just Not that Into You," you submit a budget that reduces the tax deductions regular folks can claim on their mortgages and their charitable contributions. A budget that includes greenhouse taxes on industries that will be passed along to consumers in a massive hidden energy tax. All this while, your policies have caused the DOW to sink below 7K (and falling). Retirement accounts wiped out from your callous and wanton disregard for those you purport to be helping.

By the way Barry, when you were in Canada and Michelle had her little girls night? I hear she had a troop of male strippers there because "she's not that into you". Don't worry though, she couldn't get anywhere near them with Barney Frank in the room stuffing bailout money into their G Strings. Be warned though. I hear that Michelle has since thrown Barney out of the girls club.


From the email bag:
Pass it on please!
*Nope ... didn't see this on TV !
These pictures are from protests at Osamabama's visit to AZ. Did you see any of this on TV or in the papers? Of course not! If this had been Bush it would have been headlines in every major paper and the lead story of the 5 communist TV networks, (CNN, NBC, ABC, CBS, CNBC). That's why we need to circulate this
stickerpatch.blogspot.com:80/2009/02/obama-at-dobson-high.html 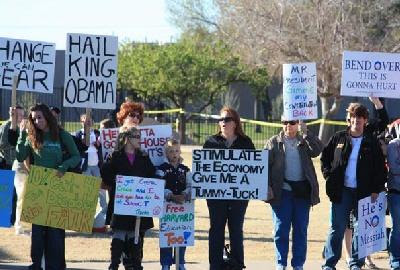